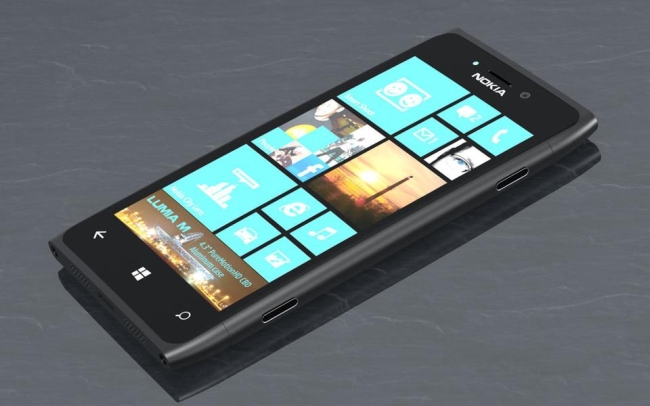 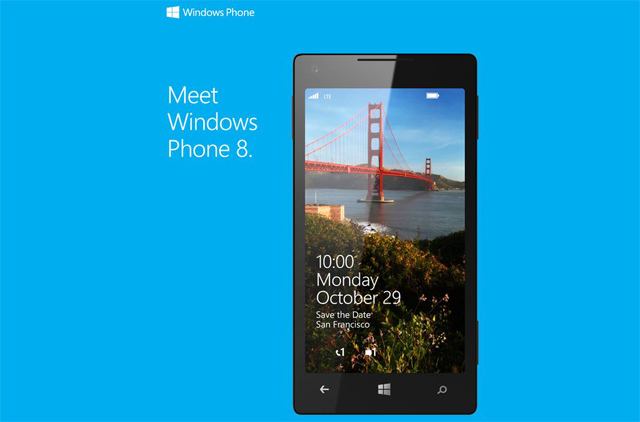 New look start screen
The biggest visual change to the experience is the new Windows Phone 8 start screen. It’s still the Metro array of live tiles, but now there’s support for two new tile sizes – and for more customisation, with new theme colours and a larger start screen layout. That side rail and arrow has gone making the live tiles fill up the entirety of the start screen.
The new small tiles take up a quarter of the space of a Windows Phone 7 tile, but can still display information. Stacking four small tiles in the space of one makes a lot of sense, because it puts more information on screen while still giving you the overview you want at a glance.
There’s just more of it on the screen at once. The second new tile is a large tile that takes up the full width of the screen. This size of tile used to be reserved for OEMs and operators (and for Microsoftâ€™s own apps), but now any application developer will be able to add a large tile to their code. Small tiles are best designed as part of an application, but will also be generated automatically for any app by Windows Phone 8.

New hardware, new resolutions
Aside from changing the opening gambit, Microsoft is also, as we expected, expanding the hardware specifications, allowing manufacturers such as Nokia lots more wriggle room in creating hardware that can potentially challenge the latest iPhone and devices like the Samsung Galaxy S III.

Lenses
Happy snappers rejoice. Your camera has just got a little bit more fun. Rather than the paltry pickings of the current effects section, youâ€™ll now be able to access a whole host of different filters, or Lenses as theyâ€™re known. Hit the Lenses button on the camera app and youâ€™ll be taken to lenses section of lens apps which youâ€™ll have downloaded from the Marketplace. Instagram, eat your heart out. Well, nearly.
Hard wired into Windows Phone 8 is the ability to code and download applications that can alter the way the camera works. In the most basic sense these can be simple things like negative or black and white filters, but they can be a lot more complex.
Microsoft demoed one which used facial recognition to capture smiles or work out the best possible shot from a series. It has been done before, both by the Galaxy S III and BB10, but the ability for developers to add easily to the camera app is a new thing.

Camera app
Gone is the zoom bar and instead comes pinch to zoom functionality within the camera app. There are also more options for control of your camera flash effect.

Screenshots
The next big tweak, well not big, but much needed, is the ability to take screenshots and save them straight into the photos application. Done by simply clicking the power and home button at the same time, the screenshot should save to the photos app instantly.

Lock screen notifications
A nice touch that weâ€™re seeing in quite a few mobile OSs these days; Microsoft has added the ability to set any app that uses push notifications to notify you straight to the lock screen from where you can unlock direct to that app. Obviously, youâ€™re welcome to set apps to do that that donâ€™t offer push notifications but you wonâ€™t hear much from them.

Multi-core processors
One of the biggest changes is support for multi-core processors. Developers will still need to use the same multitasking model as Windows Phone 7, but new background processes and faster processors will make it easier to switch between applications and for location-based software to keep up to date with where you are.
While it’s entirely possible we could be seeing quad-core Windows Phone devices, Microsoft has said they are primarily looking at dual-core handsets this Autumn.

Accessories
You’ll also be able to use a wider selection of peripherals and devices with your phone, as Windows Phone 8 and Windows 8 share the same driver model. That includes support for micro SD cards, first class citizens for data-transfer and file-copying, and even as a way of side-loading applications onto a phone.

NFC and Wallet Hub
The new hardware spec sheet also includes NFC support, which will let you use your phone as a digital wallet, with tap to pay. Windows Phone 8â€™s NFC tools offer a combination of features from those of iOS and Android, with a secure wallet to store payment details (and any other data you want to keep locked up). Youâ€™re not limited to Microsoftâ€™s own apps, and APIs mean anyone, like PayPal, can write code that works with the wallet or the NFC hardware.
The NFC technology inside Windows Phone 8 has been designed so you can use all sorts of different payment methods and cards. Using something called the Wallet Hub, which every Windows Phone 8 device will have, it is possible to use credit cards, debit cards, loyalty cards and even NFC tap to pay.
The NFC payment method will require a ‘secure SIM’ from carriers in order to function. Operators will be working with Microsoft to put the secure element of NFC directly onto their SIMs.

Skype and VOIP
Microsoft is adding new background agents to Windows Phone, including one that will handle VOIP calls. It will handle incoming calls and messages, making VOIP tools behave just like traditional phone lines. Windows Phone 8’s VOIP agent isnâ€™t just for Skype, and developers will be able to use it for their own applications as well.

Nokia maps
Windows Phone 8 is going to use Nokia’s mapping technology in every handset. This pretty much instantly kills the software advantage Nokia had over competitors but does ensure a good mapping experience on every WP8 handset.
The new Windows Phone OS will support offline maps, turn by turn directions, give developers access to map control and use the high quality global NAVTEQ mapping data. A big boost for Windows Phone’s mapping, which wasn’t particularly strong in earlier versions.
From the looks of it, things like Nokia Drive will even have live tiles, which show directions on the home screen meaning you don’t even need to open up the app.

Windows Phone 8 for business
Microsoft has made a few changes to the OS in order to make it a more tasty morsel to swallow for business users. This means added security features like secure boot and encryption options. There is also going to be device management settings and Office options. The idea of shared Windows 8 tech also means it is very easy for IT staff to manage handsets and keep them secure using normal Windows powered desktop PCs.

Internet Explorer 10
Shared code between PC and mobile makes for a much better web browsing experience using Windows Phone 8. Microsoft has provided a speedier and more secure browser app, which is apparently ahead of the likes of the iPhone and Galaxy S III in terms of performance.

More colour themes
With the look and feel of Windows Phone one of the nicest things about Microsoftâ€™s mobile OS, itâ€™s great to see that WP8 brings a whole host of new colour themes to your phone. Instead of a standard six (seven if you have a Nokia), you now get a colour selector screen palette that runs the length of your display with 20 themes to choose from.

Advanced backup
Much like Android, Microsoft has added a lot more detail to the amount you can back up your handset, and all thatâ€™s on it, to the cloud. Thereâ€™s three basic areas – your apps and settings, your text messages and your videos and photos. Apps and settings does pretty much what it says on the tin. So, when you change or reset your handset, you wonâ€™t have to go through downloading each piece of software or adding in your Internet Explorer bookmarks all over again.Backing up your text messages is fairly self-explainatory with Windows Phone 8 making distinctions of action between MMS and SMS and whether or not your location is important. Finally, you can now get more detailed about what youâ€™d like SkyDrive to go with your videos and photos – should they be uploaded at top quality or even uploaded at all.

Data Sense
Microsoft has added a handy new app for those on sensitive data plans. Data Sense keeps a track of your data usage. You can set how much data you have in your contract and on which day of the month the counter can be reset. If you do get close to your ceiling, then Data Sense will send you a warning. Thereâ€™s a live tile with it which you can pin to the Start screen.

Hot swappable microSD card
Although support for microSD was announced in June, it looks as if users will be able to hot swap them back and forth out of the phone while it’s still on without needing to restart each time.

Photo multi-select
Small change, but itâ€™s the little differences that make an OS slick. Windows Phone 8 has added a multi-selector tool to the image gallery. So, instead of going through a mountain of select-delete routines, you can now do it all in one hit, whatever your post-imaging the task.

Photo editing
The trusty, old auto-fix function is still present and correct in Windows Phone 8 but itâ€™s been joined an entirely new photo editing section by a cropping tool and a rotation tool too. You might not be able to shoot in a different aspect but the cropping tool does come with a number of standard dimension presets to use including square.

Theatre & News in Bing
Take a side swipe at the Bing search app in Windows Phone 8 and it reveals a little more than normal. Your phone will now bring you the latest news headlines, top videos and theatre information for reviews and listings of whatâ€™s on where you are.

New look Music+Videos hub
Weâ€™re expecting some bigger changes in the way of SmartGlass to the Games hub but whatâ€™s interesting at the moment is the revamp of the Music+Videos section. Itâ€™s been reskinned to look almost exactly like the Xbox area and will even offer direct access to the Xbox music store. Essentially one and the same on the Xbox 360 dash, this is of little surprise going forwards for Microsoft.

Windows Phone 7.8 update for current users
The new Start screen is one of the few Windows 8 features that will also bleed over to existing handsets. Microsoft will be bringing this in an upgrade that will be called Windows Phone 7.8.
In future, upgrades will be a little easier as well. Details aren’t finalised, but there will be a way to get the update directly from Microsoft for your phone if your network operator hasn’t made it available officially – as long as you take full responsibility if anything goes wrong.